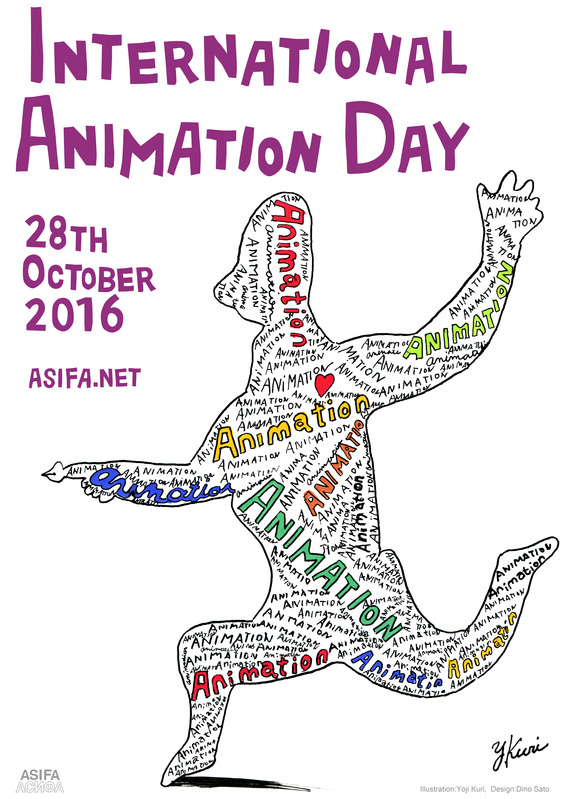 Die Geschichte hinter dem Poster:
Each year, ASIFA calls upon a famous animator to create the poster of IAD. It is then adapted for each country in order to guarantee a worldwide view of the event. The Japanese artist and filmmaker YOJI KURI created 2016 IAD poster.

Website: http://www.yojikuri.jp/
Japanese cartoonist and independent filmmaker. One of, if not the most important figures in the history of Japanese independent animation, he was the unofficial leader and most prolific of the “Animation Association of Three” collective who kick-started the renaissance of modern-styled, independently-made, adult-aimed animation in early 1960s Japan.

He is known internationally for the very black comedy of his films, with the typically naïve style of his cartooning often belying the surreal, obscene and disturbing situations they depict (though he has worked in a variety of styles and mediums, including pixilation); this made them a favourite among the fervently counter-cultural audiences, which included such filmmakers as René Laloux, of the first few years of the Annecy International Animated Film Festival, and in a 1967 publication he was considered to be “the most significant” and “the only Japanese animator whose work is known in the West” (which is to disregard the Toei Animation features and Astro Boy series that were first seen in the West around the same time that Kuri’s first several films were and mentioned in passing in the same publication, though these were not known as works of an individual and characteristic filmmaker and often had their Japanese origin played down).

He is also known in Japan for his comics, a collection of which earned him the 1958 Bungeishunjuu Manga Award. Though now retired from filmmaking he continues to illustrate and to teach animation at Laputa Art Animation School.